ROGER HOUSE TALKS TO ELT NEWS: FROM JOURNALISM TO ELT, FROM TEACHER TRAINING TO MATERIALS WRITING 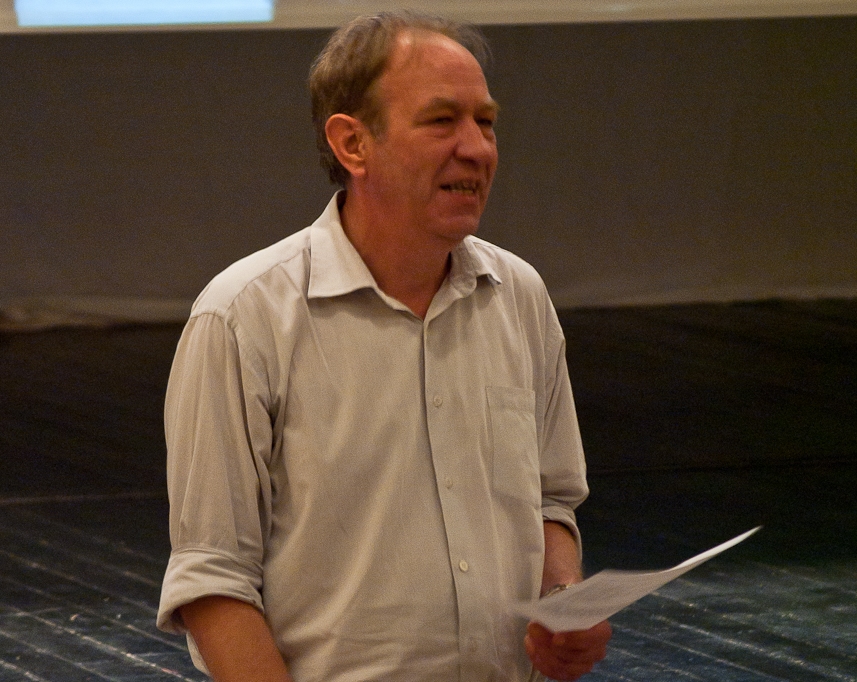 Roger House has been involved in ELT for over thirty years as a teacher, trainer and author. He is a former chairperson of TESOL Macedonia-Thrace, Northern Greece and an active member of TESOL Greece. He has presented at national and international conferences, and is the author of a teacher’s book for OUP.

Did you always want to become a teacher?

Frankly, no. It didn’t seem glamorous enough. When I was at university my first choice of profession was journalism and I did work for a while as a freelance music journalist – a brief career without much pay. An advert in The Guardian for English teachers in Sudan attracted my attraction so off I went thinking at least it would be something to write about, It wasn’t the easiest of teaching circumstances - I was working in a state secondary school with large classes of around 40 and very few resources, as you can imagine, but somehow it struck a cord so I returned to the UK and took a PGCE and was for five years as a state secondary school teacher in the inner city parts of Bristol. I suppose this is where I honed my skills.

You’ve lived in Greece for many years. What made you come here?

It was by accident I came to Greece; it was love that made me stay.

Originally, I was due to go to Bangkok to work on a teacher training programme for Bell Schools in but the project fell through, for whatever reasons, and they offered me a job as Director of Studies at a large language school in Athens.

I couldn’t at the time think of any reasons not to accept it.

I met my wife there and from thereafter I didn’t look back.

Was ELT in Greece different compared to other countries?

There was certainly a strong contrast to the teaching circumstances I had left in Britain. I had been teaching an Upper Intermediate course for the former FCE exam purely through project work. There was a strong emphasis on more communicative activities but in must be remembered that the learning was taking place in the target language community so there was more authentic exposure to the language than is possible in Greece.

What struck me about ELT in Greece was how teacher centred it was and that it seemed totally focused on success in formal exams. Some teaching I observed was very good and what interested me was there were teachers taking Certificate and Diploma courses ( CELTA and DELTA as they are now known ). But there was very little systematic CPD ( Continuing Professional Development ) going on. This, of course, has changed now as evidenced by the conferences, seminars, presentations and webinars that are being offered and teachers now seem to be more committed to their profession than before.

However, I don’t believe in making comparisons of this type. Every country has its own cultural identity and educational culture. We often need to adapt to this even though it doesn’t necessarily conform to our own teaching standards. I’ve experienced this working with students from China, Japan and the Middle East.

You have written and conducted teacher training courses for McGraw-Hill Education and Oxford University Press. Does this mean that as English expanded enormously there was a need to train teachers who came from diverse linguistic and cultural backgrounds?

It goes without saying that English has expanded enormously but what has emerged from this growth over recent years is there is a need to be more culturally sensitive to who the learners are and what their needs are. Material that would work well in Spain may be totally unsuitable in Saudi Arabia. In my early years of teaching it was very difficult to get Japanese students involved in pair or group work activities because social conventions back in Japan inhibited it.

One’s teaching approach needs to vary according to the circumstance in which it is carried out, which means training courses now need to include some degree of cross cultural awareness.

There is no ‘one size fits all’ approach any more.

You have also developed materials. How difficult it is to produce materials without knowing your learners? What do you take into account?

Usually, a publishing company will assign you an editor and issue you with a ’Writing Brief’ outlining what they want the final product to be like. In writing a teacher’s book I was told to consider Teacher A, who is inexperienced and probably has no training and Teacher B, who is experienced and probably has some training. I was up to me to balance out these two types of teachers- a bit like working with a heterogeneous class. Also, most publishers do market research before setting up a writing project so the author will have some idea of the target audience

Some materials I have written have been specifically for my own learners in order to deal with problem areas then expanded them to include other learners.

Generally though, I’ll take a group of learners, assess their level and find out their needs, This could be a B2 class struggling to meet the requirements of an exam or a low intermediate Business English group. Quite often teachers themselves have suggested materials that would suit their class

Is writing materials a lonely activity?

Not necessarily. You can involve colleagues and friends in some sort of brainstorming for ideas. You may also have been assigned an editor who is on your back all the time over deadlines.

But, yes the actual mechanics of can it be lonely, especially on Sunday evenings

You have taught almost all age groups –from young learners to university students? Is there a big difference?

The difference, I think, is mostly to do with intrinsic and extrinsic motivation.

Children can engage in the idea of learning for learning’s sake so they are more adaptable, Many adult learners come with a certain amount of baggage - pre-set notions from their previous learning background which can sometimes be difficult to overcome .And they may have a clearly defined goal

Have you ever felt embarrassed or insecure in the classroom?

Embarrassed when I managed to carried on a full 10 minutes of a lesson before it was pointed out to me I was teaching entirely the wrong class.

Insecure in Sudan because I could never be exactly sure when I would be paid.

You have conducted teacher training workshops in all over Europe. Do teachers really want to change or they keep on teaching the way they were taught?

I think teachers want change but they don’t really know how to get it.

A few years back I was conducting a workshop at the British Council on developing productive skills for teachers who were preparing students for B2 level exams. At the start of the session I asked all the participants to write down on a piece of paper a perceived problem they were facing with their classes. These I collected in and saved for the end. During the course of the workshop we did a sort of blog whereby the participants in groups wrote down on a piece of paper anything that came to mind on the topic of mobile phones being a nuisance. The pieces of paper were passed around for the other groups to add their comments. This was brainstorming by any other name; the purpose being to demonstrate how teachers can overcome the common student complaint of not knowing what to write by sharing ideas. One group wrote nothing at all. In fact this group did not get involved in any of the activities in any way whatsoever. At the end I returned to the problems they had written down at the beginning, hoping that the workshop itself had gone some way towards helping with them. For the most part I was successful, until I picked up one that read ‘My students are not motivated at all. What can I do about it?’ The inactive group skulking at the back suddenly became animated. “Yes, yes,” they cried, we wrote that!” My rather curt reply was, “Have you tried looking in the mirror?”

Moral: teachers who are motivated do want change.

How has technology changed the way teachers teach and students learn?

I can’t really see that it has..

Interactive whiteboards, which were actually not very interactive, Web 2 tools, gaming apps, online lessons, VLEs  are all just tools. The fundamentals remain the same. This week many children returned to school with joy, which could be considered unusual, but what they had missed was the human contact element so essential in teaching and learning. Many have said they hated online learning – flipped classroom, breakout rooms etc.

When the Covid crisis is over we will have to seriously review the value of online learning or perhaps its uses..

From my own experience with an online pre-sessional course at a UK university last summer I found it extremely more stressful than classroom teaching and greatly more time consuming.

It’s estimated that some 65% of children entering primary schools today will likely work in roles that don’t currently exist. Is the pace of technological change we’ve experienced only a shadow of what we will see in the next 15 to 20 years?

I think we worry too much about technological change.

I can remember when my father came home with our first TV. The world had changed utterly.

Will the next wave of change fundamentally reshape people’s lives and careers?

I think people will begin to think more carefully about what exactly a career means. There is a great deal more flexibility in the work market, not all of it good (eg ‘The Gig Economy’) In this context the future of education will play an import role in training people to adopt new skills and therefor become more practically orientated rather than academic. I did a course in Anglo-Saxon Epic Poetry at University and I remember my father constantly saying, ”What use is that? It’ll never get you a job”

He could well have been right.