School teachers’ quality of work is unique not only in the quantity of work required of them but also primarily in the complexity and nature of their relationship with students. In schools, educators ...
Sep 22, 2022
Read More

Teaching junior classes! Some of us love it, others dread it. In the latter case, kindly abstain from ever getting involved with it, lest you discover that it is not the nightmare you feared it would ...
Sep 09, 2022
Read More

The enormous amount of existing materials for the teaching of English to young learners might lead us to think that everything has been invented and nothing is left to be discovered in EFL. But when y...
Sep 09, 2022
Read More

Fun, fun, fun! This is one factor that really matters to kids. And that goes for kids on the playground as well as those in the classroom. Many educators believe that kids learn best through play. And...
Sep 07, 2022
Read More

Turn to the Child and Shed Expectations

Classifications generate expectations. The expectation is a risky state of consciousness, as it sets precarious standards. It’s easy to lose sight of what is important when assessing against quantitat...
Sep 07, 2022
Read More

The CEO of the Diana Award, Tessy Ojo CBE, Talks to Georgia Papas, Chair of QLS 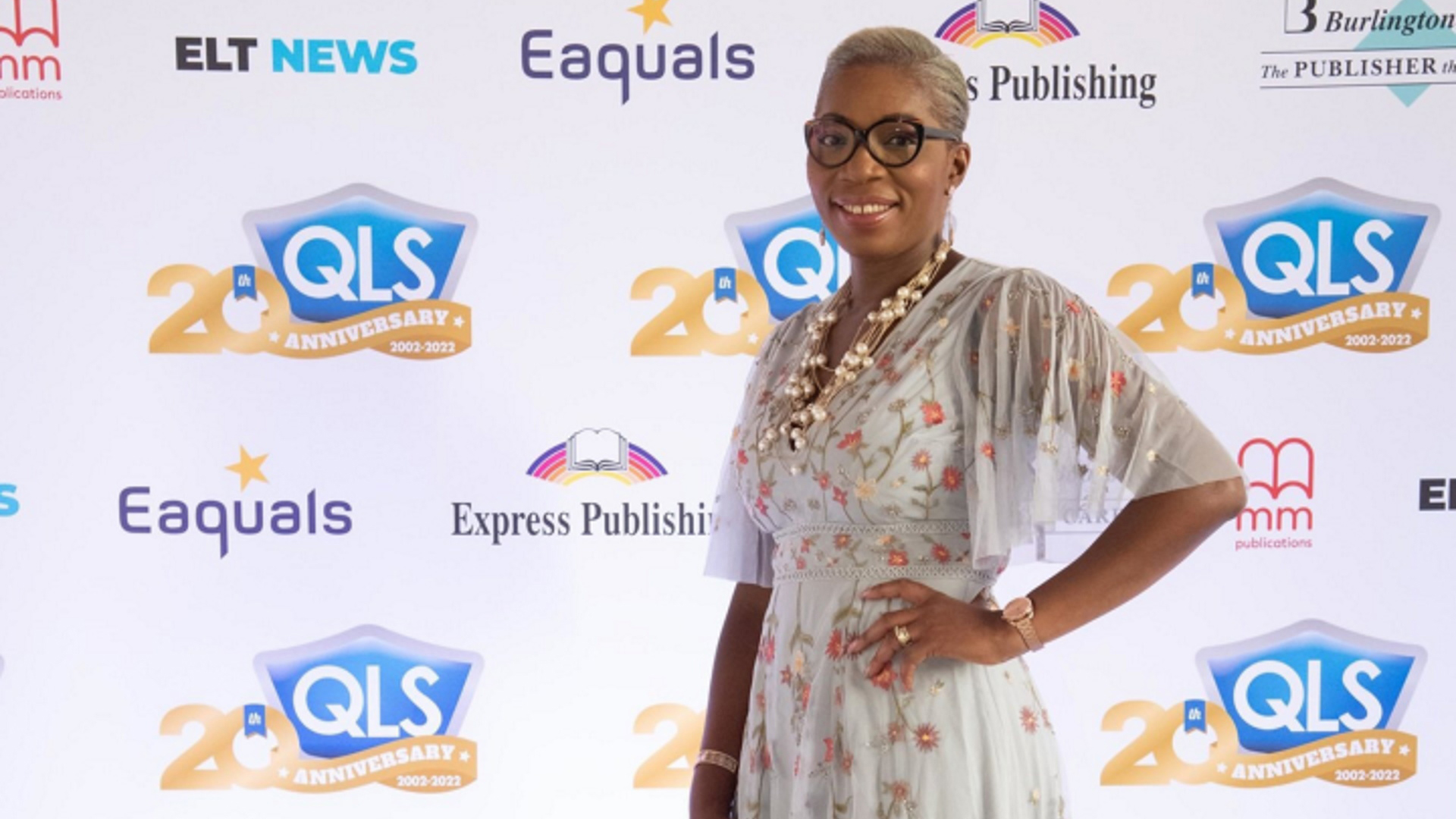 Since 2016, the QLS Schools Network has collaborated with The Diana Award royal charity to organise and host its Anti-Bullying Ambassadors programme in Greece. The Diana Award is the only charity set up in the name of Diana, Princess of Wales, and its programmes include the most prestigious accolade a young person can receive for their humanitarian work.

The Anti-Bullying Ambassadors programme is one of the core pillars of QLS's multi-award-winning Anti-Bullying Campaign, now in its 7th year. Hundreds of QLS students and educators across Greece have been trained to successfully tackle bullying in their communities.

On the occasion of QLS's 20th anniversary, Civil Society Leader and CEO of The Diana Award, Tessy Ojo CBE, visited Greece to join the festivities as Guest of Honour.

GP: Dear Tessy, I would like to warmly welcome you to Greece. It is a huge honour to have you with us for QLS's 20th anniversary. Princess Diana was very fond of Greece and visited it several times. What does Greece mean to you?

TO: I am immensely grateful to you Georgia and the entire QLS team for this kind invitation to join you as you celebrate a landmark anniversary. I love Greece. About ten years ago, my family and I visited Greece for two weeks. We stayed in Athens for the first week and then did a bit of island-hopping in the second week. So when Fred Featham mentioned the invite, I knew it was one that I would not want to miss!

GP: This year also marks the 25th anniversary of the tragic loss of Princess Diana. The world has never felt the same without her. However, her vision of a better world is kept alive and keeps growing thanks to the work of The Diana Award. How does it feel to spearhead the only charity in the name and memory of such a historical figure?

TO: It is a real privilege and an honour to lead The Diana Award and curate what Diana’s legacy means in the 21st century. I know that she had a heart for children and young people, so that really is the foundation that we build on.

GP: Please share with us your journey with the royal charity.

TO: My journey with The Diana Award started in the year 2000. I had just had my second child and I had one of those eureka moments when I realised that whilst my children had me as their champion and advocate, not every child had a champion. I felt that huge sense of responsibility that I needed to be that champion for children and young people advocating for an equitable world where your life chances were not determined by your background or history.

At this time, I was working in the corporate sector but was on maternity leave. I decided to spend the rest of my maternity leave seeking a volunteering opportunity with a youth charity where I could use my skills.

One evening, I stumbled across an advert in the paper about a new Youth venture being set up and reading through the job ad, I knew I could support the building of the systems for this charity but in a voluntary capacity as I was still on maternity leave. But also, looking at the job advert, the pay would have meant a significant 5-figure pay cut for me.

I wrote to the charity offering my pro bono support and they replied and said they were unable to accept pro bono and encouraged me to apply for the role. I did, but purely so I could meet the team directly and reiterate my pro bono support offer. It was at the interview that I realised it was The Diana Award. It was just a few months after set up.

A few days later, I find myself wrestling with this incredible opportunity which aligns with my own personal mission to champion young people at the cost of a significant pay cut and with increased financial responsibilities because I now had two children.

As you can tell, I took the leap of faith and have not regretted it since then. Obviously, with the support of my husband.

I knew from the onset that we could not advocate for or drive change for young people, without them. We knew that our work had to be grounded in youth voice and young people had to be at the centre of the organisation.

This has meant that our mission and strategy is grounded in young people’s needs and I love that about our organisation. It means every time we pivot, it is youth-led and youth-driven.

GP: How are Prince William and Prince Harry involved in the charity?

TO: We are incredibly grateful to have the support of HRH The Duke of Cambridge and The Duke of Sussex and for the young people, I know it means a lot to them as well.

GP: What are the future plans for The Diana Award?


TO: Our Mission was founded on the belief that young people have the power to change the world. But we see a problem: young people can find it hard to change the world because they experience challenges to their mental health and wellbeing, face social and economic barriers, and are rarely understood or listened to by those in power.

We want to change this. We want to see young people with improved mental health and well-being, have equal and equitable access to opportunities, and have more power and influence over decisions that affect their lives. This is the impact we aim to achieve.

Through our work, we provide direct one-to-one support to young people (24/7); we enable them to support and connect with one another; we build their capacity through mentoring and social action skills and facilitate youth-led change-making opportunities; finally, we amplify and platform their voices through our participating in various youth opportunities and through our Award programme.

As a result of our work, young people feel more confident and resilient and improve social and emotional skills. We help them feel more socially connected and gain access to more resources, allowing them to better navigate the barriers they face. We develop their skills so they can lead social action work in their communities and globally and start to believe they can influence the issues that matter to them.

GP: We, at QLS, have been working proactively for years to prevent bullying in schools with the invaluable contribution of ‘The Diana Award’. As the world gradually enters the post-Covid era, there seems to be an escalation of school bullying incidents in the world. What message would you like to extend to young people?

TO: We recently ran a "Don’t Face It Alone" campaign because statistics show us that young people are sometimes reluctant to speak out about the bullying they experience. We also know that hurt people, hurt others which only perpetuates the cycle of hurt. We need to break this. My advice to young people is always to seek help. Never ever suffer in silence. There should never be shame associated with being a victim of bullying, but speaking out is the first step towards healing and support.

GP: I know you are writing a book. Would you like to tell us about it?

TO: I have been for about a year now, but I have to be honest to say that I just have not had time to focus on this. I am also looking for a literary agent, so any agents out there, please reach out!

GP: Your philanthropic work has spanned well over 20 years. In recent years, you received, among other prestigious accolades, the Martin Luther King Award in the U.S. and the CBE medal from the hands of Prince William. What inspires you to give your best to the world?

TO: My inspiration stems from a couple of personal adversities that hit me earlier in life. They shaped my view of life and helped me understand that life is a privilege that comes with responsibilities.

GP: Tessy, it has been a pleasure talking to you. I cordially thank you and hope to see you again soon!

TO: Thank you for the opportunity to share your anniversary with you. I have also loved talking with you. Wishing the QLS family all the very best for the future and I hope to join you at your 25th, 30th and 50th anniversaries, even if I have to come along with my walking frame!